Wow... it's been 2 and 1/2 months since the last post. Well, it's not for a lack of working on the place. There just hasn't been anything that's been fully completed. We have a lot of things happening at the same time. But before too much time gets away from me, I'll share some shots of the new siding and concrete.

The front of our house, if you were to be able to view it in 1953, would have been louvered panels that allowed a partial view into the patio (now the den). We discovered that each foot wide board on the front of the house was actually 2 of the original louvers placed side by side. Difficult to explain, but basically it meant all of our boards looked split down the middle. In addition to this, the concrete around the perimeter of the slab stopped where those panels originally were. So, in order to properly close in the den, we poured new concrete where it needed to go (in 3 places) and replaced the siding on the front of the house.

There are so many details of what was wrong... I could go on and on. But it's fixed now. New electrical is being run as I write this. Here are a few shots of this phase.

One area where concrete will be poured. See the 6" wide boards? Front of the house with split boards and no concrete. BTW, before we poured the concrete the siding was nailed into a couple 2x4s loosely attached to the slab. Way janky. Redwood factory. We had to have it milled because it's no longer stocked locally in a 1" net thickness. Any loose knots I removed and did preemptive bondo-ing. Front of the house pre-battens. This front wall had to be re-framed on the inside as well. I'll share those shots when I post the new front room... hopefully some time this month. New front. Woohoo! Check out the clerestory windows. Those probably deserved their own post. I emailed a sketch and dimensions to a local glass company, fabricated the stops, and popped them in. That was a simple thing that made a big difference. New sconce lights, too. Should be working by the end of the day... 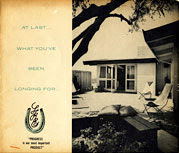